It must be one of the most iconic views in the world. Peeping out from between the fir trees was my first glimpse of Mount Everest, its luminous, ice-coated flanks etched against a cobalt sky.

I’d been trudging up a steep and dusty Himalayan path for hours to reach the Topdada lookout, but the hard slog had been worth it. While I caught my breath, Padang handed me a cup of hot, sweet lemon tea and home-made biscuits. He had sprinted down the hillside for more than an hour from the next village with the refreshments. 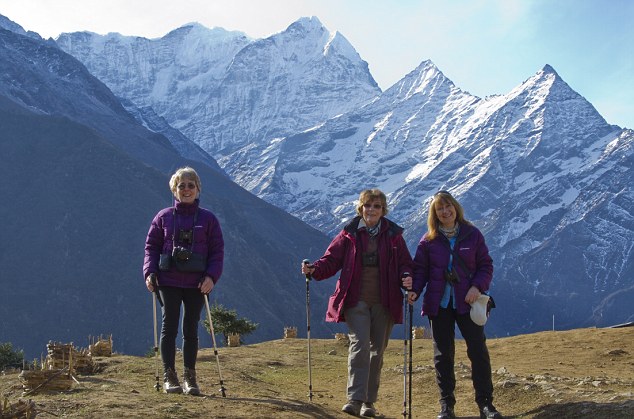 This was just part of the service during our luxury trek in the Khumbu region of north-eastern Nepal. Instead of camping, we stayed in small lodges built in traditional style, with ornately painted doors and beautifully carved ceilings inside.

We had started out from Lukla, a remote village six days from the nearest road. Flying in from Kathmandu, we landed on the short runway that has a steep bank to bring planes to an abrupt halt. I was travelling with three friends, all of us middle-aged and none superfit, so we had chosen a leisurely itinerary, walking for between four and six hours a day at a gentle pace.

We knew we were in expert hands when we met our guide, Bala. He was a local Sherpa and had climbed with Sir Chris Bonington and Doug Scott. Our porters, Hero and Saila, were slightly built but as strong as yaks, heaving our luggage on their backs and striding out at twice our pace to deposit the bags at the next stop long before we arrived.

Most mornings we were up early and on our way soon after sunrise to catch the best views of the shimmering, snow-capped peaks. By midday the clouds had rolled in so sometimes we found ourselves battling through thunderstorms and blizzards. Tibetan Buddhism permeates every aspect of life here.

We followed in the footsteps of the locals, walking clockwise around onion-shaped places of worship called stupas and spinning rows of prayer-wheels to spread spiritual blessings. Colourful prayer-flags were strung across the hillsides and walls of mani stones were engraved with sacred texts. Monasteries were built into rocky crags where shaven-headed boys as young as five were already studying for a life of contemplation.

Our route took us along rivers and across wobbly footbridges smothered with white khata scarves. But it was the entrance to the Sagamatha National Park that was truly breathtaking. The cliffs were carved with Buddhist scriptures and blood-red rhododendrums were dotted over the wooded slopes, while high above was the holy mountain, Khumbila, a colossal pinnacle of rock and ice.

From here on, we started to climb steadily, pacing ourselves as the air became thinner. Jostling for space on the narrow track were hordes of trekkers heading for Everest Base Camp, while local people carried everything from haystacks to sets of wooden doors on their backs. Arriving at our lodge, the Yeti Mountain Home in Namche Bazaar, I gulped down mugfuls of fresh ginger tea to combat altitude sickness.

We were now so high we had to stay put for two nights to acclimatise, and our breakfast eggs took twice as long as normal to boil. As night fell, temperatures dipped below zero, so we huddled around the wood-burning stove in the dining room. The lodge resembled a museum with archive pictures dating back to George Mallory’s 1924 Everest expedition. The village itself is set in a stunning natural amphitheatre, encircled by a jumble of soaring peaks. 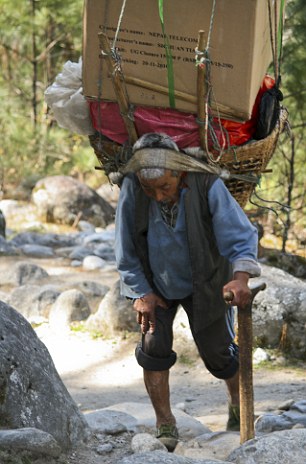 Heavy load: A local on the mountain

Just above it stood a small Buddhist monastery where we joined the lama for morning prayers. I lit a butter lamp in front of the golden statues as the lama chanted mantras, sprinkling rice over us for good luck and placing red cords round our necks, blessed by the Dalai Lama, Tibet’s spiritual leader. To learn more about Everest, I made my way to the Snow Tigers Museum, which is dedicated to all the Sherpas who have reached the summit at least four times.

The walls are covered with their photos and I paused in front of a shot of one of the greatest mountaineers, Ang Rita Sherpa, the first man to reach the summit ten times without oxygen. ‘He was given the unique title of Snow Leopard by the King himself,’ Bala explained. His granddaughter, Ang Maya, now runs a small teahouse where we stopped for a lunch of homemade noodle soup on the way to Thame, the original Sherpa village.

Yaks were tethered beside dry-stone walls and smoke from juniper fires wafted past us as we approached the isolated settlement. It was the culmination of our trek, and we gasped for air at a dizzying 13,000ft.

On our last morning we rose before dawn. The moon hung over the mountains and the ground sparkled with frost along the rough path to the Syangboche airstrip where we boarded our brief flight back to Lukla.

The yaks, normally grazing on the runway, were obviously still asleep. Taking off in the tiny turboprop, I glanced back towards Everest to watch a puff of cloud on its summit turn pearly-pink in the first rays of sunlight. It was a sight I will never forget.

Every day is a chance to discover something new, s

Learning Sherpa's way of life is an adventure in i

Resting comfortably on day 5 and day 6 of the Ever

It's all about the moment, the journey, the peole